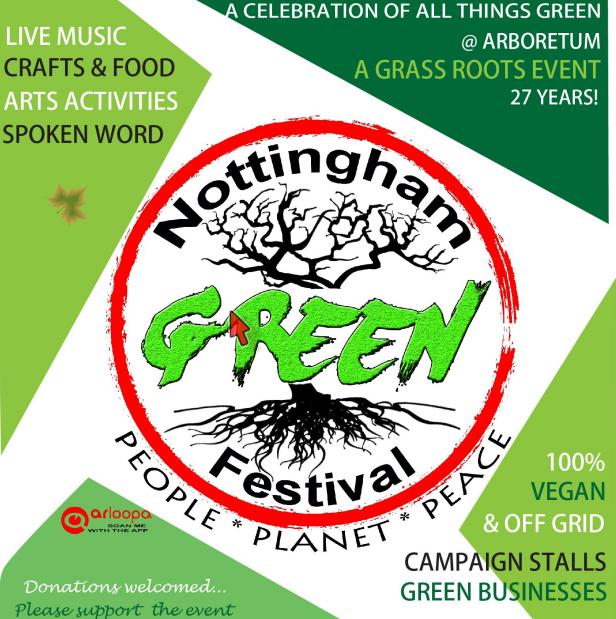 The Green Festival celebrates the coming together of the Green community in Nottingham.
In 2020, because of COVID-19, we are not having our special day. So, as a small gesture of community, we have asked our supporters to send us links to resources they have particularly liked or found useful and would like to share. Here are our joint suggestions. They span local and global themes, facts and stories, justice and law. Happy Festival!

The young people taking their countries to court over climate inaction
Children and young adults around the world are demanding action from governments on global heating and the ecological crisis
Guardian. 7 May 2021

Shell’s historic loss in The Hague is a turning point in the fight against big oil.
The oil giants that have helped drive the climate crisis are finally being forced to take responsibility for their actions.
Tessa Khan. Guardian. 1 June 2021

Emergency on Planet Earth :: emergencyc4
News and analysis about the climate emergency on planet earth, run by the multi-award winning @channel4news

Nottingham Cycling Chat
A place to chat about all things cycling in Nottingham, ask questions and share news.

Hackspace
Nottinghack is a Nottingham based group for hackers, makers and crafty creatives. If you like to build, make & learn it’s for you. You’ll probably be interested in learning about and sharing knowledge of electronics, crafts, robotics, DIY, hardware hacking, photography, computing, prototyping, film making, animation, and other creative challenges and projects.

These Kids Are Suing European Governments Because of the Climate Crisis
The young climate activists, aged from eight to 21 years old, appear to have judges from the European Court of Human Rights on their side.
Tristan Kennedy, Vice. 14 December 2020

Sea Ranger Service
The Sea Ranger Service is a social enterprise that has pioneered a model which simultaneously creates social and environmental impact. It is on a mission to affect social-economic regeneration of coastal regions whilst improving conservation of the world’s oceans. Wietse van der Werf

Cycling UK
Reallocating road space for cycling and walking helps move people around towns and cities, is proven to boost local businesses and will be vital for our economic and personal recovery.

Pedals
We run campaigns. We meet with local politicians and decision-makers to push for a more cycle-friendly city. We organise events and socials. We are a voice for everyday cycling with the local media.

Nottingham Bikeworks
Anot-for-profit community interest company focused on recycling bikes, knowledge sharing and community support. Based in the heart of Nottingham city, we believe bikes are an affordable, healthy and sustainable way to travel.

Sea Ranger Service
The Sea Ranger Service is a social enterprise that has pioneered a model which simultaneously creates social and environmental impact. It is on a mission to affect social-economic regeneration of coastal regions whilst improving conservation of the world’s oceans. Wietse van der Werf

Cycling UK
Reallocating road space for cycling and walking helps move people around towns and cities, is proven to boost local businesses and will be vital for our economic and personal recovery.

Pedals
We run campaigns. We meet with local politicians and decision-makers to push for a more cycle-friendly city. We organise events and socials. We are a voice for everyday cycling with the local media.

Nottingham Bikeworks
Anot-for-profit community interest company focused on recycling bikes, knowledge sharing and community support. Based in the heart of Nottingham city, we believe bikes are an affordable, healthy and sustainable way to travel.

My Mate’s Band – Green EP
Performed at the Notts Green Festival 2019. Their new album, Green EP, holds so catchy environmental songs and 50% of all profits from merchandise and downloads will go towards Nottingham Green Festival.

Nottingham Energy Partnership
Introduced ‘Chilli Pepper Pledges’,to challenge our community and make a change in their lives which would have a positive impact on our carbon footprint.

V3 Power
Set up in 2006 and is based in Nottingham, UK and is a group of engineers and science educators. Our team has varied over the years but we are currently a two-person, part-time operation.

NTU Green Academy
Developing, facilitating and showcasing Education for Sustainable Development at NTU and beyond

Extinction Rebellion
We face floods, wildfires, extreme weather, crop failure, mass displacement and the breakdown of society. The time for denial is over. It is time to act

Farmers hatch plan to return area the size of Dorset to wild nature
WildEast aims to convince farmers, councils and others across East Anglia to pledge land to wildlife
Guardian 14 July 2020

73 Cows
3 Cows is the story of Jay Wilde, a beef farmer who battles with his conscience every time he takes his cows to slaughter. Feeling trapped within an industry he no longer believes in, Jay knows he must make a change and do what no other farmer from the UK has ever done before.
Alex Lockwood. Vimeo video

Okja – film on Netflix
How have we built a world where we don’t have enough of its most valuable resource? What happens when we run out? And what can we do to solve the problem now?
Trailer: YouTube Video 18 May 2017

Ashes to Honey (2010)
Documentary trailer: Although this is a fiction film, the narrative is very much a reflection of our current farming industry and disregard for both animal, and human, life for profitable gain. A tiny island in Japan is threated by a government approved nuclear power plant. This documentary shows the islanders self-sustaining lifestyle, the struggles against the nuclear power company and it also compares all this to Sweden’s renewable energy initiatives as an example by which other countries should follow.
YouTube Video 9 Aug 2011

Global Justice Now : Trade Justice
Trade has always been part of society and in itself it could be a good thing. But trade deals are no longer just about selling more goods to other countries. Instead, they are often about giving huge new powers to big business, affecting every aspect of society

The Story of Plastic
THE STORY OF PLASTIC takes a sweeping look at the man-made crisis of plastic pollution and the worldwide effect it has on the health of our planet and the people who inhabit it. Spanning three continents, the film illustrates the ongoing catastrophe: fields full of garbage, veritable mountains of trash, rivers and seas clogged with waste, and skies choked with the poisonous emissions from plastic production and processing. Film Trailer

Seed : The untold story
Few things on Earth are as miraculous and vital as seeds. Worshipped and treasured since the dawn of humankind, these subtle flecks of life are the source of all existence. Like tiny time capsules, they contain the songs, sustenance, memories, and medicines of entire cultures. They feed us, clothe us, and provide the raw materials for our everyday lives. In a very real
sense, they are life itself.

The Story of Stuff with Annie Leonard
The Story of Stuff is a 20-minute, fast-paced, fact-filled look at the underside of our production and consumption patterns. The Story of Stuff exposes the connections between a huge number of environmental and social issues, and calls us together to create a more sustainable and just world.
YouTube Video. 13 Nov 2013

Podcast: Outrage and Optimism
If you want to know what the green vanguard of “the establishment” is doing, listen to interviews with influential shakers and movers here.

Podcast “Can we ensure the climate has a future after the corona crisis?
the podcast explores what a post-lockdown world might look like and how it will affect the climate. Why we need to treat the climate crisis as urgently as the Covid-19 pandemic? Why challenging the free market ideology and committing to universal public healthcare is essential, and what actions we can take to win a brighter, greener future.

Global Launch
To make progress on climate action we need to collaborate on a global scale – and your community has an important role to play. For any of you out there with big ideas, Countdown is a global green initiative for individuals, groups and business to host their own TEDx events, of any size on 10.10.2020 or afterwards.

Nemonte Nenquimo : This is my message to the western world – your civilisation is killing life on Earth
Guardian. 12 October 2020
We Indigenous people are fighting to save the Amazon, but the whole planet is in trouble because you do not respect it

Fat footprints by Anne Goodwin
A short story about a woman’s confused attempt to reduce her carbon footprint from the short story collection, on the theme of identity, Becoming Someone, published by Inspired Quill

The Helen Loewenstein Memorial Trust
HLMT makes grants to cover course-fees and essential study expenses for student midwives in Liberia who would not otherwise have sufficient funds to train to become qualified midwives.

The Guardian view on restoring lost rights of way: in search of beauty
Editorial, Guardian. 3 November 2020

Law and the Environment

Can Lawyers Save The World?
Climate change litigation is already big news in the US and the number of environmental cases in our own courts could be about to increase.
Tom Heap asks what the law can do.
Costing the Earth BBC Radio 4 14 Oct 2010

Stop Ecocide campaign
Our mission is to support the establishment of ecocide as an international crime, in order to forbid and prevent further devastation to life on Earth.

The destruction of the Earth is a crime. It should be prosecuted
Businesses should be liable for the harm they do. Polly Higgins has launched a push to make ecocide an international crime.
George Monbiot. Guardian 28 March 2019

Client Earth
We use the power of law to bring about systemic change that protects life on earth.

Web design by Chris Seal — Up ↑