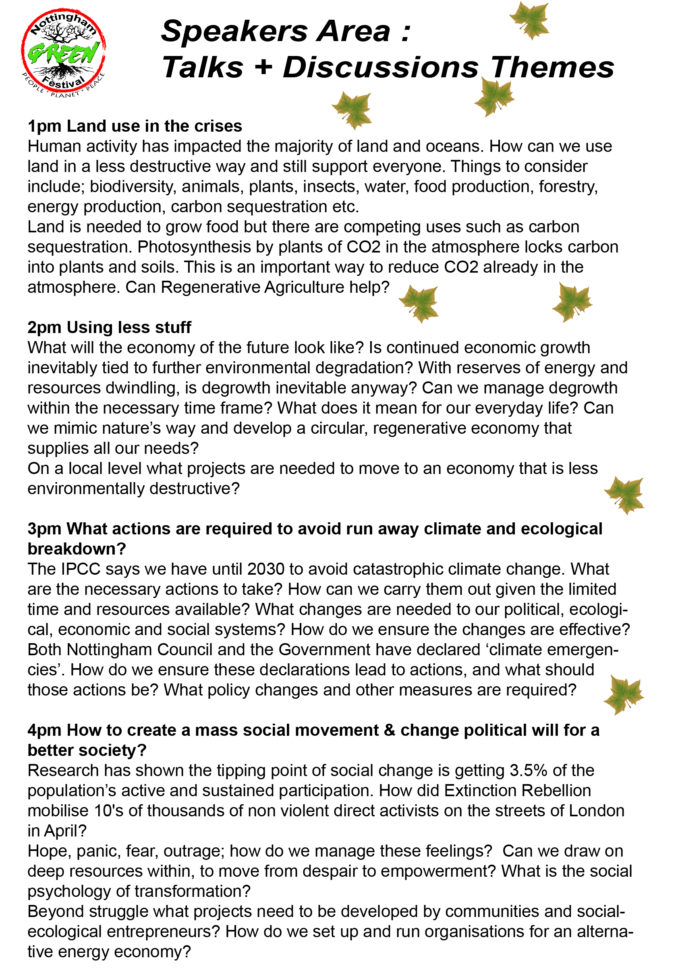 1pm Land use in the crises

Human activity has impacted the majority of land and oceans. How can we use land in a less destructive way and still support everyone. Things to consider include; biodiversity, animals, plants, insects, water, food production, forestry, energy production, carbon sequestration etc.

Land is needed to grow food but there are competing uses such as carbon sequestration. Photosynthesis by plants of CO2 in the atmosphere locks carbon into plants and soils. This is an important way to reduce CO2 already in the atmosphere. Can Regenerative Agriculture help?

What will the economy of the future look like? Is continued economic growth inevitably tied to further environmental degradation? With reserves of energy and resources dwindling, is degrowth inevitable anyway? Can we manage degrowth within the necessary time frame? What does it mean for our everyday life? Can we mimic nature’s way and develop a circular, regenerative economy that supplies all our needs? On a local level what projects are needed to move to an economy that is less environmentally destructive?

3pm What actions are required to avoid run away climate and ecological breakdown?

The IPCC says we have until 2030 to avoid catastrophic climate change. What are the necessary actions to take? How can we carry them out given the limited time and resources available? What changes are needed to our political, ecological, economic and social systems? How do we ensure the changes are effective?

Both Nottingham Council and the Government have declared ‘climate emergencies’. How do we ensure these declarations lead to actions, and what should those actions be? What policy changes and other measures are required?

4pm How to create a mass social movement & change political will for a better society?

Research has shown the tipping point of social change is getting 3.5% of the population’s active and sustained participation. How did Extinction Rebellion mobilise 10’s of thousands of non violent direct activists on the streets of London in April?
Hope, panic, fear, outrage; how do we manage these feelings? Can we draw on deep resources within, to move from despair to empowerment? What is the social psychology of transformation?
Beyond struggle what projects need to be developed by communities and social-ecological entrepreneurs? How do we set up and run organisations for an alternative energy economy?

New at #GreenFestival – speakers & breakout discussions:
1: Land use in the crises
2: Using less stuff
3: What actions are required to avoid run away climate and ecological breakdown?
4: How do we create a mass social movement to change political will and build a better society? pic.twitter.com/Vy0jid9BPL

Web design by Chris Seal — Up ↑